If you’ve ever wondered what robots, spiders and cartwheels have in common, it turns out quite a lot actually!

In the face of danger, many animal species rely on the ‘fight or flight’ response to get themselves out of trouble. But a newly discovered species of spider prefers to cartwheel its way out of danger instead!

This acrobatic arachnid has captivated the imagination of engineers and provided an unlikely source of inspiration for a new breed of robot. Intrigued? Then read on as we explore this incredible story. 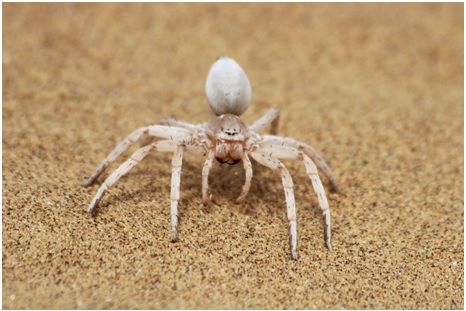 The Cebrennus rechenbergi, affectionately known as the flic-flac, is a spider species like no other. Unlike their other eight legged brethren, when threatened, these spiders are capable of cartwheeling their way to safety.

Oh, and that’s not the only remarkable thing about these spiders either. It has often been said that a good offence can be the best form of defence, and these spiders take the meaning of this phrase to a whole new level!

Rather than merely running away from predators, these agile arachnids literally flip in the face of danger too, and will propel themselves towards a perceived source of threat.

Ok, so we know what you’re thinking, that’s probably not a smart move. But in fact, there is method in their madness.

In the barren sand dunes of the Erg Chebbi desert, in Morocco – from which these spiders hail – running away can prove pointless, because there is quite simply, no place to hide!

This cartwheeling motion, at which this spiders are so adept, confers a number of advantages, enabling them to double their speed, from 3.3 feet per second to 6.6 feet per second. Not bad, right?!

After seeing these spiders in action, German engineer and biomimeics expert Dr Ingo Rechenberg, was inspired to create a robot that could mimic the remarkable gymnastic abilities of these spiders.

Rechenberg believes that such as robot, capable of achieving a similar means of locomotion, would confer considerable advantages in space exploration missions. More specifically, they are aiming to develop a robot version of the spider that could navigate the rough terrain on the surface of Mars.

But that’s not the only application this revolutionary robot could be used for. It could work in a variety of other environments too, including in the agricultural field and even on the ocean floor.

If you’re wondering what the advantages of this kind of motion would be, the answer is quite simple. Tumbling or rolling would allow more of the robot to be in contact with the surface its moving over, thereby spreading its weight over a larger area, allowing for greater traction and weight distribution than either wheels or legs can offer.

Rechenberg has already created a prototype spider that moves across the ground, using a similar technique to the cartwheeling spider, and you can check out a video of this in action below.


Here at European Springs Ireland, the subject of biomimeitcs – biologically inspired engineering- is something we find truly fascinating. That’s why we simply couldn’t resist sharing this incredible story with you. As leading manufacturers of a range of innovative springs, we understand how vital the right source of inspiration can be for the engineering field, and are excited to see what other treats the field of biomimeitcs has in store.

If you would like more information about our services and the range of products we offer, please don’t hesitate to contact one of our friendly advisors today, by giving us a call on 048 9083 8605.