To Boldly Go Where No Origami Has Gone Before…

You’ll no doubt be aware that today is Origami Day…
No? Well, it is! While we may be involved in the manufacturing of high quality products, from our constant force springs to our wire forms, we like to pay respect to other engineering marvels throughout the ages. To celebrate Origami Day we felt it apt to address the influence of origami on engineering, looking at its implication on space technology.

The Influence of Origami on Space Technology

Origami has become inspirational for the mechanical engineers at Brigham Young University who have been considering the implications of origami-like structures for use in space. Teaming up with an origami expert, BYU are looking at taking their partnership with NASA to the next level in an attempt to address some issues which can impact and limit space exploration. The issue in question is the ability to send larger structures into space.

A team of mechanical students have been working with NASA’s Jet Propulsion Laboratory to design a solar array which can be compacted down during launch to be later released and deployed once the craft reaches its destination. Here these solar panels can enable the generation of energy for the station. As you can imagine, a larger solar panel means a greater amount of energy, so through utilising origami they can begin to make the most of the sunlight available to them and power the station much more effectively.

Through the use of rigid silicon, they can utilise the paper origami principles to create solid, working solar panels. As you can imagine it is essential that the material is considerably thicker than paper as paper wouldn’t last very long! However, the financial and practical implication of getting a larger structure in space becomes much more difficult; so through utilising these origami principles they can expand the solar panels to 10 times the size at which they are originally transported. 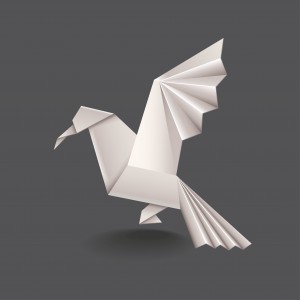 As such you can imagine we are quite excited by the potential of implementing such origami-influences on space exploration; it can only take it further. So watch this *ahem* space.

Next time you see someone creating a paper crane or a flower with origami, you can truly appreciate just how far this art form has come. Origami is very similar to springs in that they have influence on the most basic of objects – such as a slinky – to helping out with, well… space travel!

So if you find your project is in need of the influence of one of our high quality and versatile springs, don’t hesitate to get in touch. Our team of engineering professionals are always available to put a spring in your project’s step, so contact us on +447889171165!